The hard weather condition could have affected the physical performance of the players, usually both team play with really high pressure and try to have possession. Columbus Crew pressure was not that high as usual. Sporting Kansas City did play with high pressure, but not all the time, for short time they waited for the Columbus in their own field.

Russell on average has 2.6 successful dribble per game (10th in the league), in this game just 1 out of 4 was successful. Also he average 3.3 shots per game, he had none this game.

High performance player:Tim Melia: Stop a penalty and 2 clear occasion just outside of the 6 yard box. He was the one who committed the penalty foul, either way he stopped it. 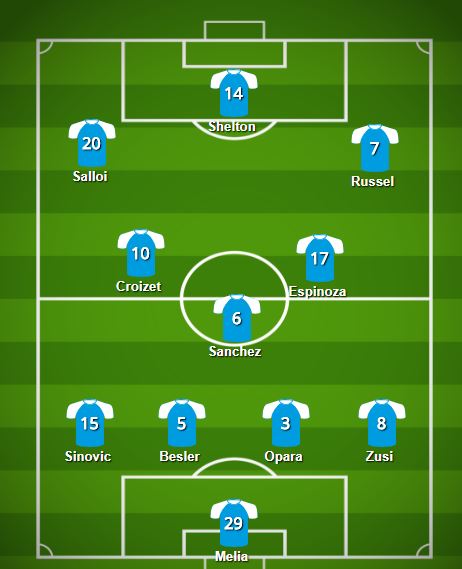 This game SKC did not as pressure high as they use to do it, probably because of the weather, just Espinoza look really intense with the high press. Just on the goal kicks and throw-in was really high pressure. When they lose the ball they runned back, with a formation between a 4-1-4-1 and 4-5-1, depends on the position of Higuain, who always has a SKC midfielder close to him.

When the team could not go higher due the Columbus defensive, Shelton moved a like back, just behind the 2 center midfielder of the Columbus to received the ball and distributed to the wingers.

At the end of the first half Higuain received a red card, that change the game. All the second half SKC had the ball for long period of time but without good chances to score. Even before the red card, SKC had 10 players in the opposite half: 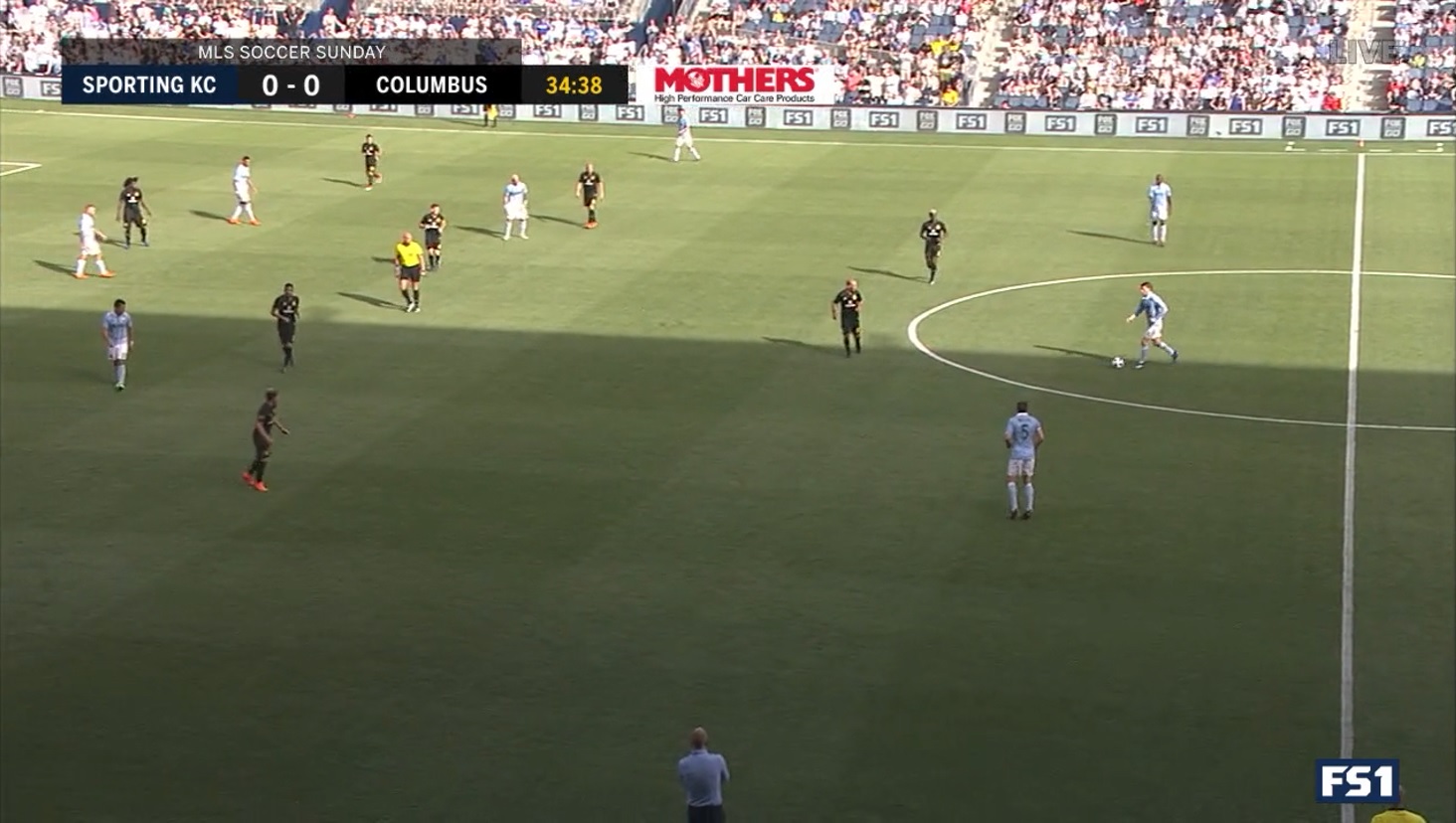 But just like the first half, no clear chances was created.

In the 2nd half Espinoza and Croizet swap sides, in the new position Espinoza had more participation, that it is show in the next 2 graphics: 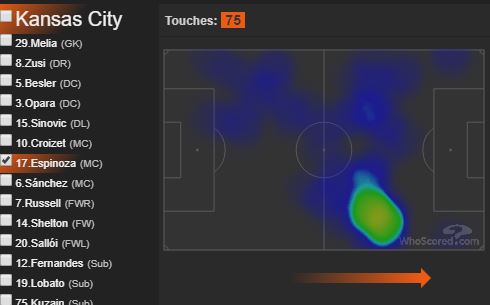 Heat map of Espinoza, when he was on the right side (2nd half) he touched more the ball. 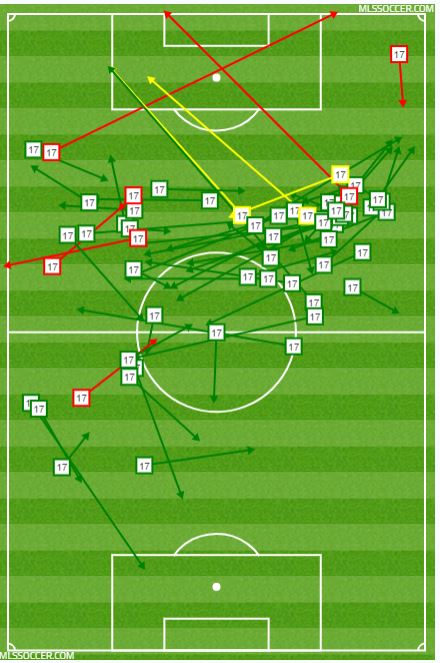 The pass map show that on the right side he made more passes and with a better rate. And overall Espinoza had more participation (75 touches) than Croizet (28 touches). Espinoza just played 16 more minutes than Croizet.

Columbus made a good job on defense, Sporting Kansas City have in home game on average 19 shots vs 15 shots this game, 6.2 shots on target vs 3, 9 shots inside the box vs 5 and 11.7 dribbles per game vs 5 this game. In despite of had a little more possession this game (61%) than the average home game (59%)

One of the keys was to stop both wingers, Russell and Salloi, for that the Columbus had a committed defense system, everytime one of the winger had the ball, there were 2 Columbus player step on him, the midfielder and the full back: 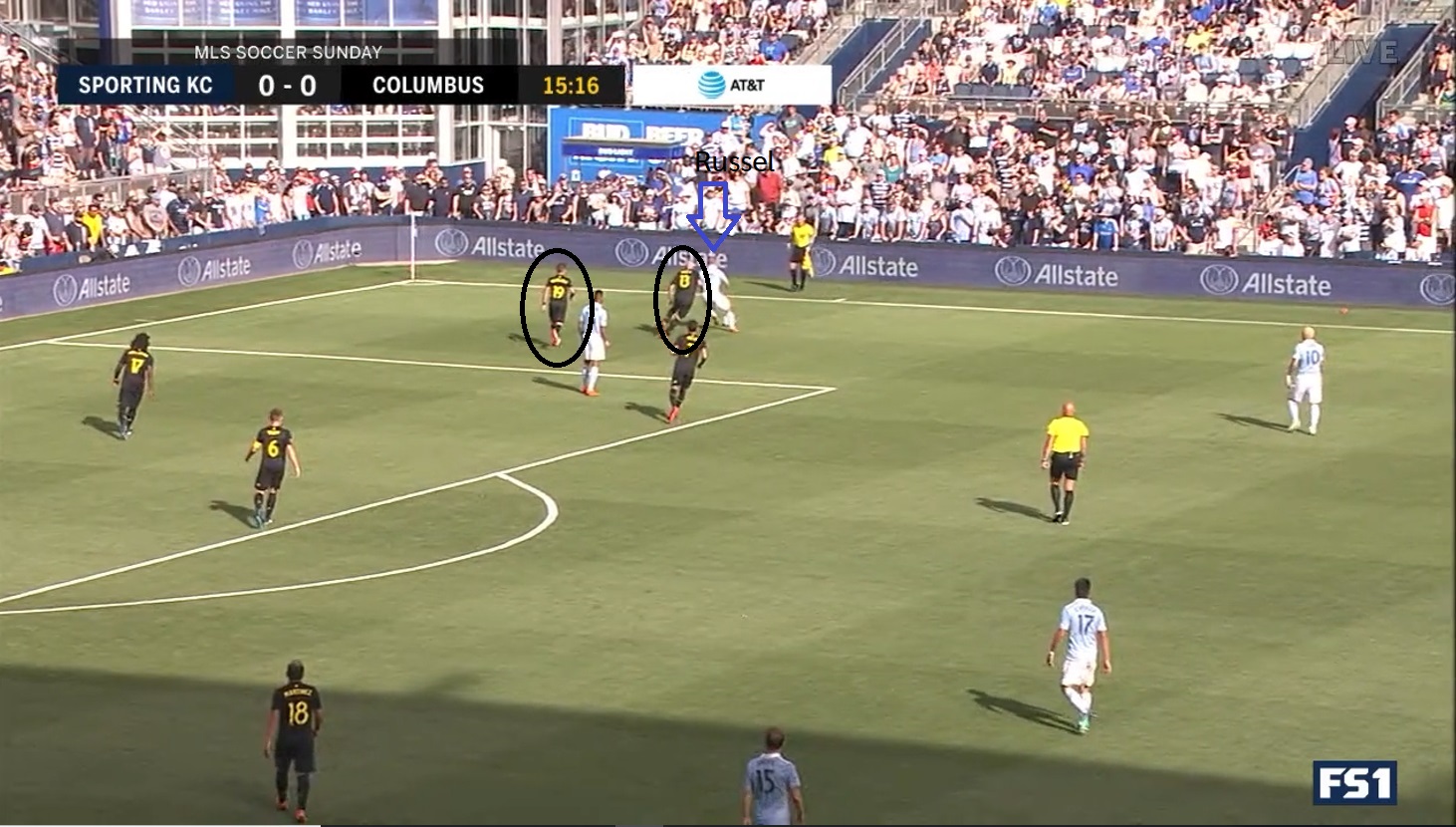 In this way, if Russell can get rid of the first one, the second defender is really close to clear the ball.