Kaye is one of the best midfielders in the MLS, and he was a cheap sign from the USL. Is there another Kaye playing in the USL?

Mark-Anthony Kaye is right now one of the best midfielders in the MLS. He was signed from a USL team 2 years ago, where he played 4 seasons with 3 different teams. His debut in the MLS came when he was 23 years and has not stopped playing since then, leaving on the bench players like Feilhaber or Nguyen.

According to one source, Kaye was signed for “an undisclosed fee believed to be one of the highest-paid for a USL player”. But, let's be honest, that is still cheaper than a Felipe Gutierrez, Llenget or Bedoya to mention players that have similar characteristics and positions. And if there was a Kaye in 2017 with 22 years in the USL, it might be another one in 2019. So, who is the next Mark-Anthony Kaye?

The idea is not to find a player with the same toolset or game style that Kaye has. The idea is to find someone with similar stats, age, and position that might not be under the radar of any MLS team. The last 2 season of the Canadian player, was with Lousiville City FC (after his contract finished with Toronto FC), who have not a partnership with any MLS team.

First of all, let's see his % of successful actions and passes:

With these stats, I search for players in their early 20’s that match. The nominees for the next Kaye are: 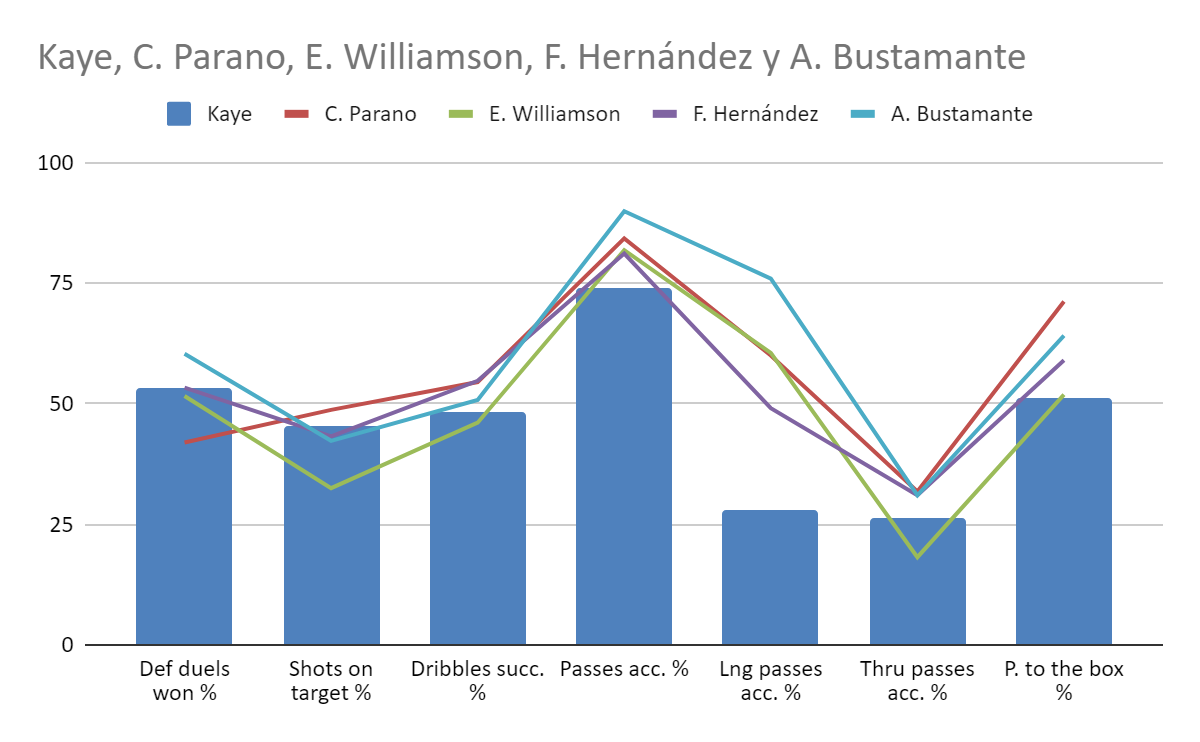 Of course, these numbers are a little bit tricky, why? because some of these players do not match with the average per 90 actions in some of the stats. For example, is not the same have a 60% success in defensives duel when you only have 2.85 a game than when you have over 8 per 90 minutes. I can explain that with the next table:

The lack of defensives actions from Bustamante and the xA and low shot assist from Hernández took them out of the race. The xG, Shots-per 90 and progressive runs numbers from Parano and Williamson are really even, but this post is about players that have not debuted in MLS yet, and Williamson just did it this season, Parano is the one the looks the most likely to become Mark-Anthony Kayes, and both are left-footed. And played as attacking midfielder or wingers in the USL.

But that is just from the stats point of view. Reality is totally different, they have a totally different game style. Parano is shorter with a low gravity center, he turns really quick, dribbles with an astounding easiness in small areas. He is really quick-moving in open areas. Kaye, on the other hand, is more pass-oriented, taller, needs more space to use his long stride at full speed, can not dribble in small areas, but oh boy, he can pass.

But the idea of looking at the next Kaye is more an exercise for me to dig in the USL stats and find an interesting player. And it worked, now I found a really interesting player like Parano and quality passing of Williamson and Bustamante. Next post, a video report about Parano.

The other nominees were: