A tall central midfielder, with a defensive attitude and good 1st touch.

A tall central midfielder, with a defensive attitude and good 1st touch, that is a short description of Justin Haak.

Haak signed a homegrown contract in January 2019. He was part of the U-20 USMNT in 2019 friendly matches. He was loaned to Hartford Athletic to play in the USL Championship in September 2020, where he was in the starting XI in the 8 games the team played.

Profile: Justin Haak shows a lot of maturity and personality for his young age. Only 19 years but he guides his teammates when they have the ball or when they need to pressure, he points out where the teammate should pass the ball, or who they should mark. He cheers his teammate after a good action and, talks very calmly with the referee. Justin is turning his head constantly, with or without the ball, which gives him great vision and awareness, he also has the ability to read the game, anticipating where the ball and opponents are going to move. 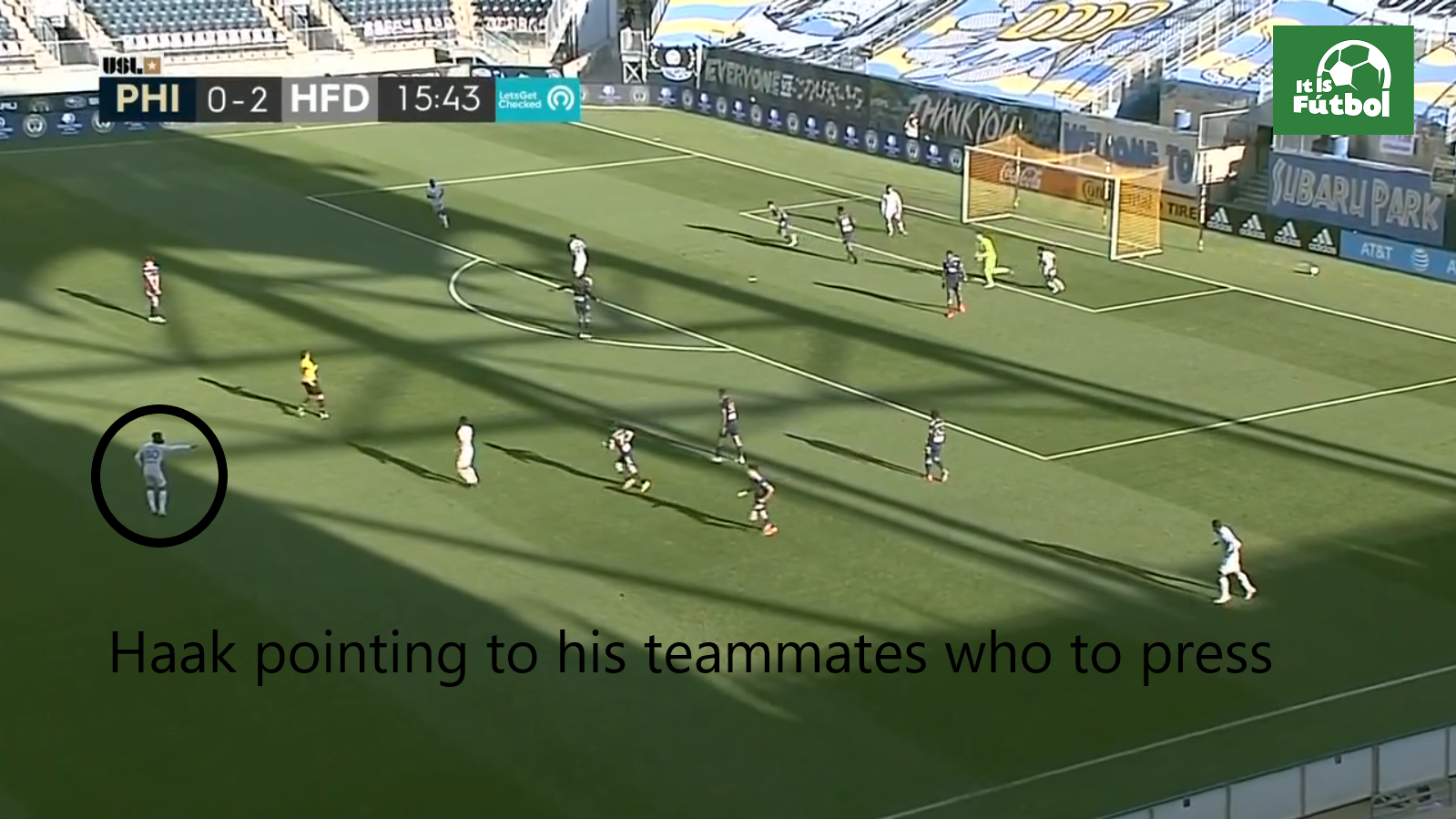 Physical characteristics: He is a tall and slim player, with long legs and long hair (easy to identify from far away). It does not have a good pace, slow movements in long distance. His height and long legs help him in the anticipation and to win aerial duels.

Linking/distribution: Justin is good at circulating the ball in all directions, he passes the ball in short and long-distance. He has a good vision to link with the wider players (diagonal passes and switching sides), if he does not see a free man he reset the play going back to the defenders. He is good at linking with the defenders and taking the ball to the midfielders and wide teammates. It is not common for him to pass to the final third or to the box, he prefers short vertical passes. 25.3 passes per 90 with 83.2% accuracy.

Defensive duels: He has good timing with his footwork to steal and block passes and shots. He is hard to take on by the attackers, 9 defensive duels per 90 with 62.2% won. He is good in the 50/50 challenges, he uses his long legs to get the ball before the opponent while he is in the physical challenge. For the opponents is hard to turn when Justin is marking them, he does not allow them to win the position. 1.53 fouls per 90 and 0.36 yellow card per 90.

Pressing: In the transition attack-defense he stays in his position in front of the defenders, it is uncommon when he goes forward to recover after a loss. He only pressures out of his position when he tracks forward the opponent attacking midfielder and there is another central midfielder to cover him. He knows when to try to steal the ball and when to cut line passes to force a long ball from the opponent. His awareness helps him to anticipate the opponent and recover the ball. 6.45 interception per 90 minutes and 10.45 recoveries per 90.

Covering: His awareness helps him to cover the wing-back and the center back when they get out of position or are out of numbers. He is slow in the running but he is in the right position to cover and not make long runs. 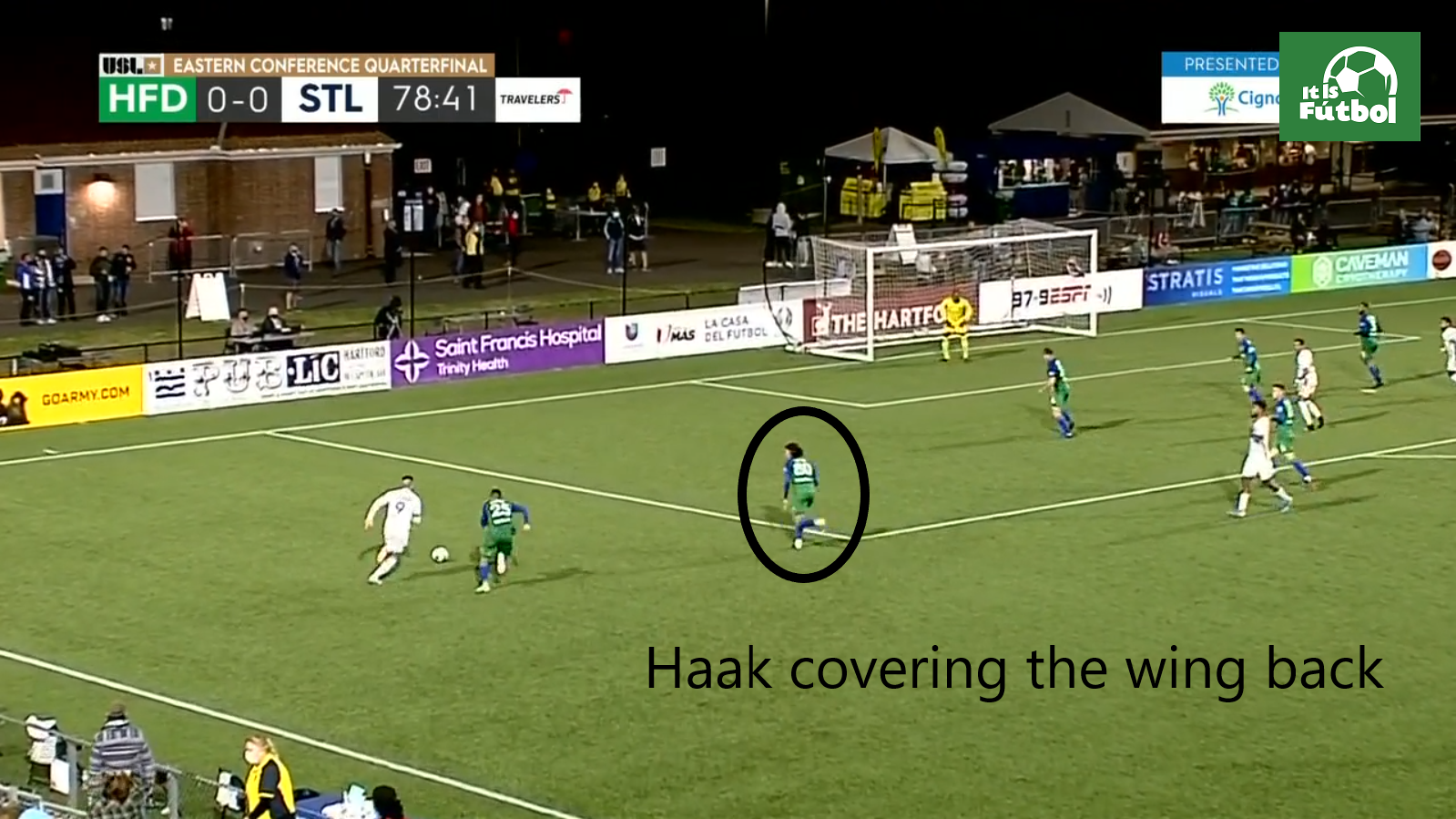 Receiving the ball: Even with his long legs, he has good technique, good control, and good 1st touch. Because he turns his head constantly he knows where to pass the ball with 1 touch. He has good body orientation when he receives the ball.

Retaining possession: Not very strong but he uses very well his body to protect the ball, he also suffers fouls when he is retaining the ball. He does not have the ball for too long, usually make 1 or 2 touches, and pass the ball. He is not the best at carrying the ball forward, that is why he passes the ball very fast.

Movements: He gets closer to the defender to help during the build-up, he shows himself as a free man to receive the ball behind the line of pressure. He finds the pockets behind the defenders. He is slow in his movements, especially in open space, but his good sense of location helps him with that.

Set-pieces: Because of his height he is very useful in the set-pieces, he marks one of the tallest opponents on the defensive side, or he is the box attacking the near post in the corners. His only goal was after a corner.

Forward runs: He does not go forward very often, usually, he stays in front of the defenders, he is more a defensive central midfielder than a box-to-box.

Heading: He is a good header. If he sees an open player he can pass the ball putting the ball down with the head otherwise, he clears it very well in the long balls. 3.16 aerial duels with 73.1% won.

Justin seems ready for a bigger challenge that might be NYCFC (the team that owns his rights) or a team in a better league. He is a good fit for a team that uses a positional play style. His passing abilities were not in the best context in the loan to Hartford. The Hartford Athletic had 43% of possession in the 8 games Haak played with them, in the NYCFC (or another possession focus team) style he should pass more than 25 passes per 90, and should be easier for him to find teammates to pass short not be forced to play long balls. His awareness hide is slow runs, he has good location and timing but not good runs. His abilities running with the ball are mediocre, but he does not need it because of his position and because he is quickly passing the ball and not holding it.