Gallegos is one of the most skillful player in the USL

Short (176cm / 5’9’’) really quick, good acceleration. Use both feet to shoot and assists but he is right-footed. Good dribbler in open space and under pressure between the lines, really skillful. He can change direction thanks to his low gravity center.

San Antonio FC formation is a 1-3-4-2-1, with 2 wings back that provide the width and stretch the defense, while the 2 AMF play inside. Usually, Gallegos plays next to Parano (21 years), who has similar characteristics of Gallegos, or Di Renzo (24) or Bailone (26), that are taller, stronger, and not that skillful but with more goals. Playing as AMF Gallegos has to create danger and deliver end products like goals, shots, assists and, generate fouls, that’s why he is taking risks constantly in the final third. 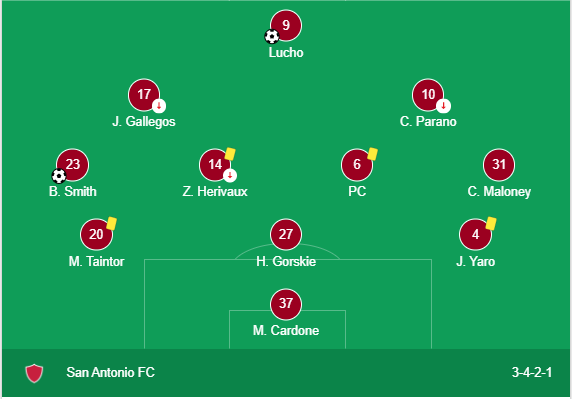 When his team is in possession

Good vision for though passes. Good decision making in counter-attacks in open space. Good passes between the fullback and center-back. He attracts a lot of fouls. In the offensive transition, he shows himself as a pass option between lines. He tries to dribble more than he should, he is a good dribbler, really skillful but he should be better deciding on when to pass and when to dribble. He holds up the ball for too long instead of passing and helping with the fluidity of the play. He tries to be more vertical and deliver an end product (shot or assist) when he is playing this as AMF.

Sometimes when he has the ball he goes straight to the middle where there are a lot of defenders instead of trying to pass to the wider area or reset the play going to the back. When he goes wide, and because he is an ambidexter, it is hard for the defender to know his next move but in the wider area is harder for him to receive the ball. Creative in his passes and dribbles. He points were his making the run behind the defenders. He takes the corners and set pieces in wider areas.

When his team is out of possession

He pressures in the opponent half, he runs and tracks down players. He is short but he fights the aerial duels he is aware of the 2nd ball. He puts pressure on the defenders when they have the ball so they have to get rid of the ball and force them to make a mistake.

As a CM Gallegos is next to PC, a Brazilian defensive midfielder, that gives him the chance to be the box-to-box midfielder, helping in the defense moving forward in the attack just behind the striker and AMF.

When his team is in possession

Dynamic without the ball, he tries to be a free man all the time. He is good at receiving the ball and turning, protecting the ball even with his body. Good switching sides. He carries the ball and takes it to the opponent half and assists. He makes better decisions when he is not close to the opponent box, he knows when to pass and to dribble when he is the midfield. When he receives in the mid area he gives more fluidity to the possession, he is more in touch with the ball, receives and turns like a number 10 just behind the striker. Because he is already in a frontal position, if he sees the option he tries a long shot. 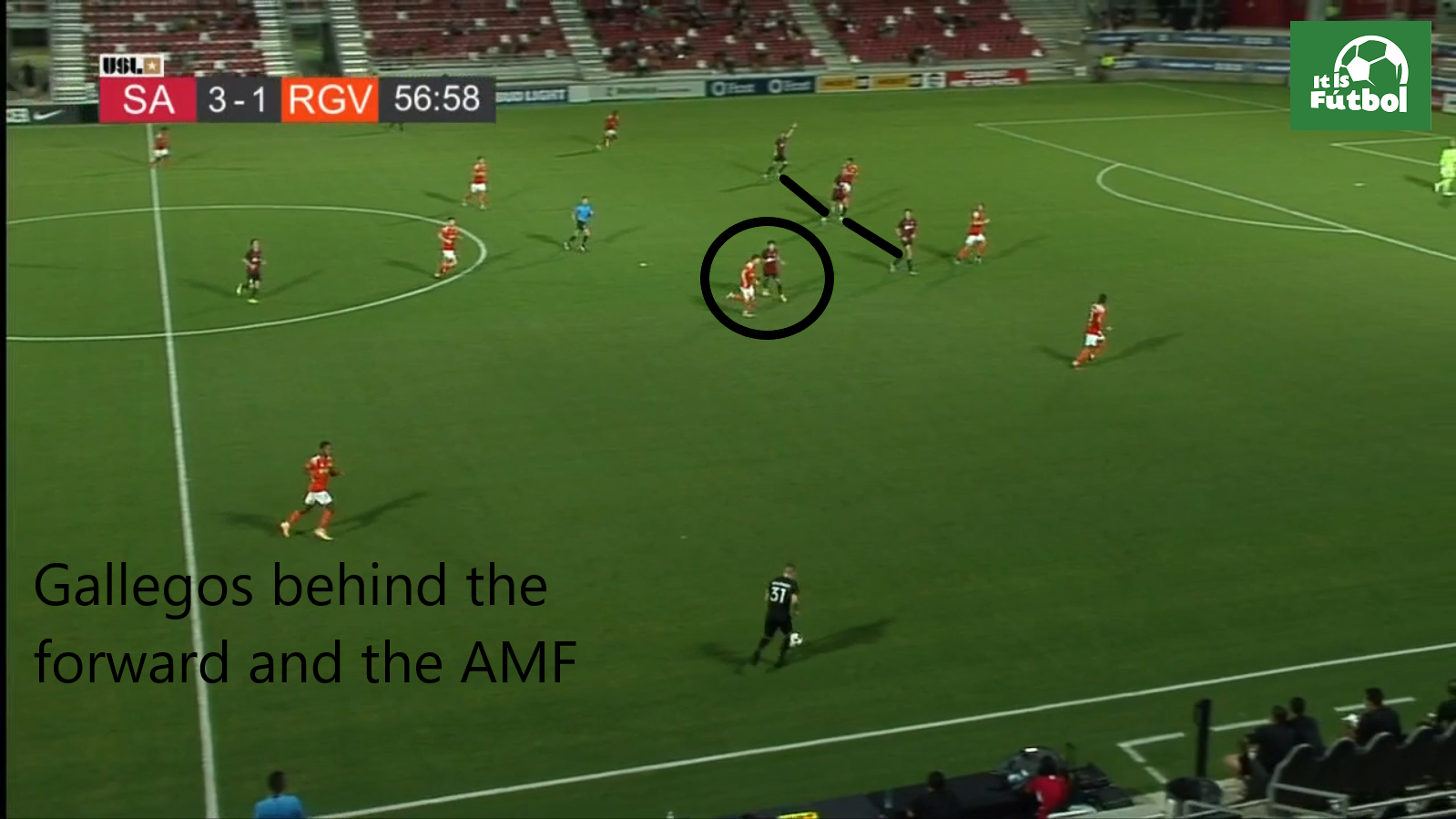 When his team is out of possession

Covers more ground as a CM than as a wider player. He has defensive awareness and helps the wing-back defending, he also stays in front of the CB when he needs to. He tries to recover the ball as soon as he loses it, his good pace helps him to chase the opponents and recover the ball from the back. In the long balls, he is aware of the 2nd play, looking for the outcome after the aerial duel. 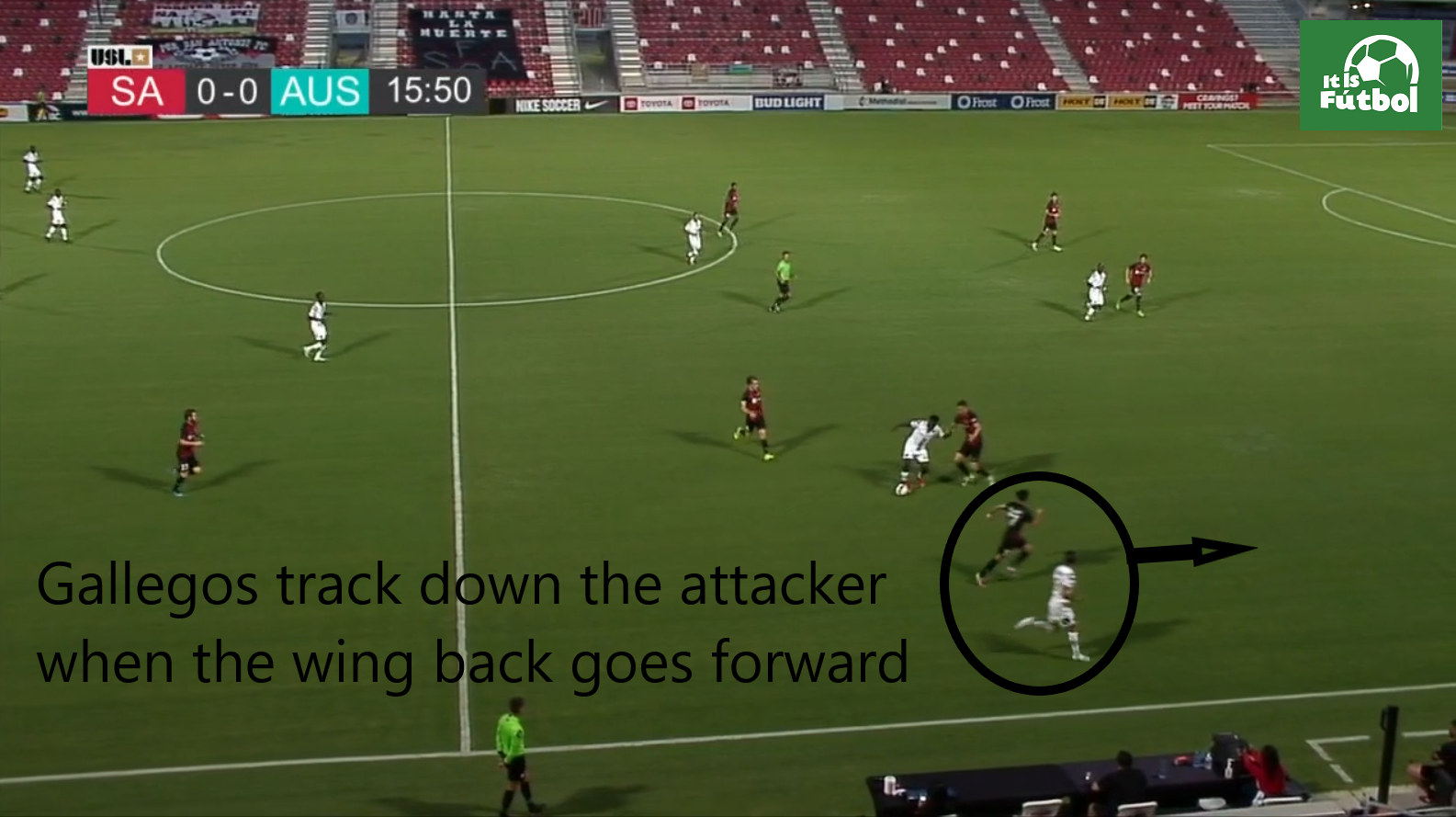 Calm player and a shy player without the ball, his communication is basically when he points where he wants the pass behind the defenders, aside from not being very communicative with the referee or teammates.

Still a raw talent, with a lot of skill, pace, and vision. Still needs to develop his IQ and decision making with and without the ball, and that is going to depend on which position he will play the next couple of years. As a CM he is in more touch of the ball, uses his vision, good control, and technique to assists, and still uses his dribble abilities and pace to make progressive runs in the counterattacks. But he needs to develop anticipation to recover more balls and increase his stamina. As an AMF, he is more dangerous, uses the dribble and the vision closer to the opponent’s goal, but he goes to the wider area where he loses touch with the ball, and having the line next to him is like a restrain for his vision to play through passes.

In my opinion, he can develop better as a CM, he plays with more confidence. He has more touches in that position, he is good at the defensive awareness and tracks down the opponent. And still goes forward and be a playmaker behind the striker to assist and, be a threat to goal in the opponent's box. He has the characteristic of a box-to-box.